In June 2011, a female patient with pulmonary infection and dyspnea was admitted to the National Institutes of Health hospital and was quickly diagnosed with Klebsiella pneumoniae, which is resistant to multiple antibiotics. During hospitalization, the hospital used the most stringent measures to prevent nosocomial infections, including isolating patients, cleaning medical devices that patients were exposed to, and so on. During the hospital stay, no nosocomial infections were found and the patient was cured and discharged in July 2011. However, after a lapse of one month, the same drug-resistant Klebsiella pneumoniae infection occurred again. In just 5 months, a total of 17 patients were infected, 10 of whom died and 6 died of Klebsiella pneumoniae. This incident has caused close attention in the hospital. Are these new cases coming from the first case? Why is the spread of super bacteria still occurring under the most stringent epidemic control measures? Is these existing disease control measures ineffective, or are there still other channels of communication that have not yet been controlled? 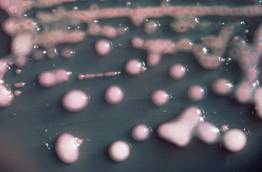 In the event of a real infectious diseases, the researchers used the Roche 454 sequencing machine evolution of transmission of superbugs and drug resistance mutations were tracking 1. Initially using conventional pulse electrophoresis or PCR analysis, only patients infected with the ST 258 type Klebsiella pneumoniae can be identified and cannot be further subdivided. Later, the researchers used 454 to deeply sequence the isolated bacteria in the throat, bronchoalveolar lavage, groin, and urine of the first patient, and found that the original NTUH-K2044 strain in the urine, the other parts of the strain There are 7 different mutations, in which the bronchoalveolar lavage strain and the throat site have 3 mutations, the throat contains an additional mutation, and the inguinal strain contains three different mutations. Further, the strains isolated from all infected cases were sequenced, and compared with the reference NTUH-K2044 strain, a total of 41 different mutations were found. Using these mutations, these patients were divided into three groups by cluster analysis, and the most likely route of transmission was drawn in combination with the records of hospitalizations (induction time, ward, etc.).

Through these analyses, it was confirmed that although the second infection occurred three weeks after the first case was discharged, there was no obvious intersection between the two cases, but the new case did come from the infection of the first case; the first There are different mutations in different parts of the patient's bacteria. These different bacteria infect different patients, at least three independent infection routes; there is an inpatient who carries germs but does not develop disease, and becomes a spreader of the bacteria; Mutations that caused resistance to pathogens were discovered.
These conclusions suggest that Klebsiella pneumoniae may be lurking in the patient until an outbreak, and the detailed information of the genome can better determine the route of transmission of the bacteria, and even find the carrier of the pathogen to control the infectious agent, and these use traditional epidemiology Experiments and research methods are difficult to obtain. In addition, in-hospital infection control measures need to be improved, such as limiting infection cases in a ward area without transferring to the ward, restricting the use of medical devices in one ward only in the ward, and in view of the need for such bacteria to survive in vitro, Method and so on.
Through this real event, it shows that the 454 sequencing method can provide information that cannot be provided by traditional methods in the field of disease control such as nosocomial infection, which can better explain and quickly track the transmission line of infectious diseases, so as to take effective measures in a targeted manner. Contain its spread.
1. Tracking a hospital outbreak of carbapenem-resistant klebsiella pneumonia with whole-genome sequencing. Evan S. Snitkin et al. Sci Transl Med 4, 148ra116 (2012). doi: 10.1126/scitranslmed.3004129

Pain Relief Patch for Breast
[Name] Medical Cold Patch
[Package Dimension] 10 round pieces
The pain relief patch is composed of three layers, namely, backing lining, middle gel and protective film. It is free from pharmacological, immunological or metabolic ingredients.
[Scope of Application] For cold physiotherapy, closed soft tissue only.
[Indications]
The patches give fast acting pain relief for breast hyperplasia, breast fibroids, mastitis, breast agglomera tion, swollen pain.
[How To Use a Patch]
Please follow the Schematic Diagram. One piece, one time.
The curing effect of each piece can last for 6-8 hours.
[Attention]
Do not apply the patch on the problematic skin, such as wounds, eczema, dermatitis,or in the eyes. People allergic to herbs and the pregnant are advised not to use the medication. If swelling or irritation occurs, please stop using and if any of these effects persist or worsen.notify your doctor or pharmacist promptly. Children using the patch must be supervised by adults.
[Storage Conditions]
Store below 30c in a dry place away from heat and direct sunlight.